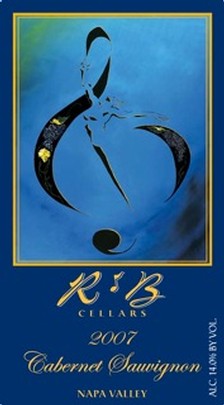 This 2007 R&B Reserve Napa Valley Cabernet Sauvignon is an extraordinary wine with remarkable depth and complexity. It exhibits a huge core of dark black cherry fruit with elements of dark black currant, tea, blackberry and violets in the bouquet. The small addition of Merlot enhances the structure, the color and adds a touch of sweet cherries. The flavors of dark black berry, currants, chocolate, mocha and cassis are evident, with a huge juicy blackberry finish. This wine is a classic Cabernet Sauvignon with all of the exotic spice and layers of fruit you would expect from a Reserve wine.

This 2007 R&B Reserve Napa Valley Cabernet Sauvignon is a stunning example of our Reserve Cabernet legacy. This particular vintage was a little softer than other vintages. It is 97% Cabernet with 3% Merlot. The aromas of black cherry, blackberry, floral bouquet, tea and plum immediately grab you and pull you in. As it opens the flavors of blackberry, cherry, semi-sweet chocolate, currants and jammy dark fruits dance in the mouth, with hints of pepper and spice and voluptuous tannins. A long, lingering, smooth, round finish. A classic Napa Reserve Cab.

Vineyards: Bingham Ranch in Calistoga is one of the oldest Cabernet vineyards in the Napa Valley, dating back to 1850s. There are three parcels of vines used in our Cabernet, one is 56 years old, another is 36 years old, and the third is 18 years old. It is a small berry clone with very low yields, approximately one and a half tons per acre. The resulting fruit is very intensely flavored with a rich dark blackberry profile that makes beautifully structured Cabernet Sauvignon.

Cellar Practices and Winemaking: Perfectly ripe grapes were harvested in late October, 2007. They were crushed into a stainless tank and cold soaked at 50F for 5 days. The temperature was increased to 70F, and cultured yeast fermentation started, which lasted thirty days at a peak temperature of 90F. The grapes were gently pressed; the resulting wine was racked into 100% new French oak (60 gallon) barrels, from ten different French coopers: Vicard, Seguin Moreau, St. Martin, Billon, Trieul, Ermitage, Boutes, Jarnac, Bel Air and Chalufour. The Cabernet was blended in the classical way with small amounts of Merlot, also from Bingham Ranch. The wine was aged for 36 months in oak and given an additional 24 months of bottle age prior to release.