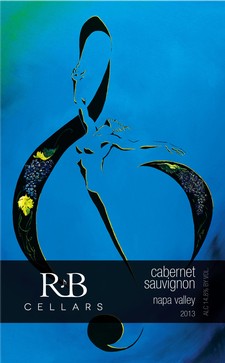 This 2013 R&B Reserve Napa Valley Cabernet Sauvignon is the 26th vintage of our Napa Valley Reserve Cabernet. It's an extraordinary wine with remarkable depth and complexity, with a huge core of dark black cherries, dark black currant, tea, blackberry and violets in the bouquet. The small addition of Merlot enhances the structure, the color and adds a touch of sweet cherries. The flavors of dark black berry, currants, chocolate, mocha and cassis are evident, with a huge juicy blackberry finish. This wine is a classic Cabernet Sauvignon with all of the exotic spice and layers of fruit you would expect from a Reserve wine.

This 2013 R&B Reserve Napa Valley Cabernet Sauvignon is a stunning example of our Reserve Cabernet legacy. This wine is big, bold  with a dark plum skin color. It is 97% Cabernet with 3% Merlot. The aromas of black cherry, blackberry, floral bouquet, tea and plum immediately grab you and pull you in. As it opens the flavors of blackberry, cherry, semi-sweet chocolate, currants and jammy dark fruits dance in the mouth, with hints of pepper and spice and voluptuous tannins. A long, lingering, smooth, round finish. A classic Napa Reserve Cab.

Just received this little lovely in my Winter club pack (2020) and was very anxious to try it as it is a Reserve Cab and provided as a special treat for the holidays!! Well, it did not disappoint! This wine is complex with many layers of dark fruit that slowly reveal themselves with a delicate and silky, savoring experience! Kudos, Kevin and Barbara - you done did it again!!

I recently sampled the recently released 2013 Napa Valley Cabernet Sauvignon and it is excellent. This wine is ready to drink now but should also be good for years to come. It is in keeping with the other vintages of Cab that Kevin Brown, the winemaker, has made which is to say "It is a very good wine". I suggest that if you like Cabs you should definitely try this one.

This is by far a favorite. Love the weight and elegance of the bottle and once opened, experienced the boldness of flavors that have obviously been closely attended to in the development of this wine. So very smooth, bold and delicious with a great combination of flavors. Excellent job to the winemakers!